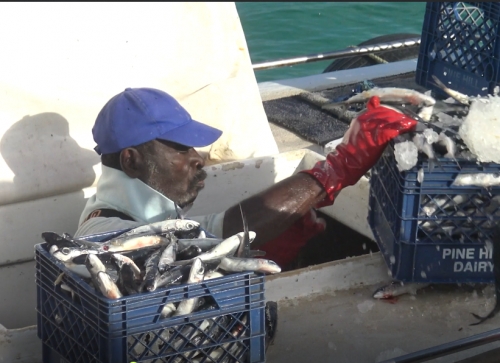 The discussions will take place in the context of the Special Meeting of the Joint Working Group on Flyingfish in the Eastern Caribbean, constituted by the Caribbean Regional Fisheries Mechanism (CRFM) and the Western Central Atlantic Fishery Commission (WECAFC) of the Food and Agriculture Organization (FAO). Chief Fisheries Officers, as well as representatives of fisherfolk organizations, the Organisation of Eastern Caribbean States (OECS) Commission, and development partners such as FAO-WECAFC, the University of the West Indies (UWI), the Caribbean Natural Resources Institute (CANARI), and the French Marine Research Agency – IFREMER, are due to attend the meeting, being held at the Blue Horizon Hotel in Christ Church, Barbados.

“This meeting of the Joint CRFM/WECAFC Working Group on Flyingfish is timely and important given the challenges we face in the region from climate related changes affecting the marine environment and flyingfish stocks, and ultimately the livelihoods and food security of thousands of persons engaged along the entire flyingfish value chain,” said Milton Haughton, Executive Director of the CRFM.

“Our objective is to use the best available information and international best practices to make and implement reforms, and to work together to address the challenges and ensure sustainable and profitable fisheries now and in future,” Haughton added.

The stakeholders have been engaged in a series of consultations and technical studies towards strengthening governance arrangements, such as updating the Eastern Caribbean Flyingfish Fishery Management Plan (FMP), which was adopted in 2014, as well as developing a policy for the sharing of data and information among the countries involved in the fisheries. The updated FMP is intended to improve the efficiency and viability of the sector and would also be adaptable to other fisheries.

The flyingfish initiative also focuses on improving stakeholder participation in planning and decision-making and improving collaboration between CARICOM States and the French Islands in research and management of the flyingfish fisheries.

The Joint CRFM/WECAFC Working Group is expected to produce tangible outputs for consideration by decision-makers at the meetings of the CRFM Ministerial Sub-Committee on Flyingfish as well as the Ministerial Council, both due to be held in early 2019.

Six CRFM Member States—Barbados, Dominica, Grenada, St. Lucia, St. Vincent and the Grenadines, and Trinidad and Tobago—are beneficiaries of a series of subprojects for which the CRFM is taking the lead. The CRFM had contracted Blue Earth Consultants, a division of the Eastern Research Group, to lead three of the six flyingfish sub-projects in collaboration with a team of local and international partners. CANARI in Trinidad and Tobago and Nexus Coastal Resource Management (Nexus) in Halifax, Canada, have been leading the remaining three sub-projects.

The CRFM, through this initiative, is emphasizing the Ecosystem Approach to Fisheries (EAF) for the management of the flyingfish Fishery, in a consultative approach that involves the full range of stakeholders. Th Initiative is supported with funding provided by the UNDP/GEF CLME+ Project which is working to achieve a healthy marine environment supporting enhanced livelihoods of the people of the Wider Caribbean.

A 16-minute documentary on the Eastern Caribbean flyingfish fisheries has also been produced as a part of the initiative.

More in this category: « Best practices for FAD Fisheries being finalized for Caribbean and Pacific SIDS Caribbean Fisheries Minister to consider climate change protocol at 8th Special Meeting in Barbados »
Login to post comments
back to top