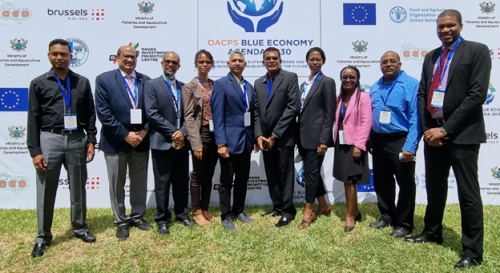 Belize City, Friday, 8 April 2022 (CRFM)—Several Member States of the Caribbean Regional Fisheries Mechanism (CRFM) are participating in the 7th Meeting of Ministers in Charge of Fisheries and Aquaculture of the Organization of African, Caribbean and Pacific States (OACPS), being hosted in Accra, Ghana, 5-8 April 2022.

The Ministerial Meeting, which opened on 7 April, was preceded by two days of engagements in which senior technical officials from eight (8) CRFM Member States and the Dominican Republic, joined by the Executive Director of the CRFM Secretariat in Belize, had an opportunity to collaborate with their counterparts from Africa and the Pacific region to formulate recommendations for Ministerial action. The decisions of this Ministerial Meeting of the Organization of African, Caribbean and Pacific States (OACPS) would form the basis for activities in its two-year workplan for the cross-regional organization.

OACPS is an organization comprised of seventy-nine (79) Member States from three (3) regional blocs: Africa, the Caribbean and the Pacific. It works towards sustainable development and poverty reduction within its Member States and greater integration into the world’s economy. It is against this backdrop that the organization places strong emphasis on sustainable fisheries and aquaculture, while promoting a vision for the OACPS Blue Economy Agenda 2030.

Many of the items on the meeting's agenda have also been on the table at regional meetings of the CRFM. These include blue economic growth based on the marine resources; strengthening sustainable small-scale fisheries to improve livelihoods, food security and nutrition in the region; preventing illegal, unreported and unregulated (IUU) fishing, which the CRFM believes should encompass the broader issue of organized crime in the fishing industry. This region advocates for stronger international and regional cooperation as well as stronger sanctions and penalties in law to effectively deter IUU fishing and other criminal activities associated with it, including human, drugs and arms trafficking, money laundering, and seafood fraud.

The Ministers agreed to scale up sustainable and inclusive fisheries and aquaculture value chains. They also discussed and agreed to take action to strengthen ocean-based programs for adaptation and mitigation of Climate Change and ocean acidification as well as preserving maritime spaces of Member States amid receding baselines resulting from sea-level rise and coastal erosion due to changing climate.

More in this category: « CRFM and CARICOM IMPACS partner with Norway to fortify the region’s response to fisheries crimes CRFM Ministerial Council positions fisheries and aquaculture to help reduce Caribbean’s food import bill by 25% by 2025 »
Login to post comments
back to top