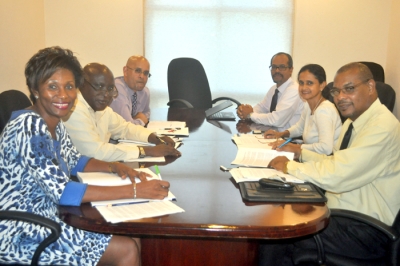 BRIDGETOWN, Barbados, 16 December 2016 (CRFM)— There is still a long way to go but experts meeting here Thursday expressed optimism that slow but steady progress was being made toward introducing region-wide laws, rules and regulations intended to make Caribbean fish and seafood not only ready for world trade but safe for Caribbean tables.

The experts, drawn from fisheries, legal affairs, food health and safety and standards agencies across ten countries in the Caribbean Forum of ACP States (CARIFORUM), ended two days of deliberations on model legislation, protocols and guidelines for health and food safety related to fisheries and aquaculture.

“Still a long way to go but making progress,” said Executive Director of the Caribbean Regional Fisheries Mechanism (CRFM) Milton Haughton at the workshop at the Accra Beach Hotel.

Haughton said that following the workshop the draft model legislation is to be reviewed, and followed by another round of consultations held with stakeholders and a legal team before it can be finalised and submitted to regional policy-makers for consideration.

While not offering a timeline for the implementation of the legislation he stressed that improved standards and systems for sanitary and phytosanitary standards (SPS) in fisheries are critical to the region socially and economically.

"We will reap good economic benefits when we have stronger systems that will assure, just not the safety but the quality of the products that we want to export. We will be able to access markets, international markets that we are not now able to access ," Haughton said.

The CRFM said the region’s export trade in fish and seafood trade earns about 315 million US dollars annually – a business that could boom or bust depending on how the region meets the global challenge of SPS standards.

British legal expert Chris Hedley, the project’s lead consultant, said the greatest challenge in drafting the legislation was making it nimble enough to adapt to rules and regulations which are frequently changing in the European Union.

Hedley cautioned that the United Kingdom following Brexit may soon be introducing its own standards as well.

"It is about trying to identify what things change all the time and try to make sure there is a flexible methodology as it were for updating those and making sure we make it as user friendly as possible for the government trying to implement these rules," Hedley said.

After final consultation and approval by the Belize-based CRFM, the region’s fisheries agency, the model laws and policies will then be recommended to CARICOM’s Council for Trade Economic Development (COTED), the regional bloc’s forum of trade ministers, as well as other CARICOM bodies.

The model fisheries and aquaculture SPS legislation would have to be enacted in each exporting nation. During the 18-month-old project, the model legislation has been developed in consultation with policymakers, fisherfolk, processors and other industry players.

Experts said the countdown is on towards the end of voluntary compliance with EU food safety standards, considered among the toughest in the world. Failure to meet EU standards would block CARIFORUM countries from tapping into niche markets overseas and boosting foreign exchange earnings, they stressed.

Investigations by the consultants on the project have exposed large gaps in legally binding protocols managing food safety throughout the region.

The experts found barriers to trade of fish and fisheries products due to inadequate SPS standards; minimal legislative standards for aquaculture; concern about food security and decreasing use of local, fresh seafood – the solution for which improved SPS support is an essential component, the CRFM said.

The two-day meeting was the high point of a European Union-funded project to help CARIFORUM countries introduce laws, regulations and a governance system to guarantee safe seafood for export to EU markets and beyond.

The project, which is being carried out by the Belize-based CRFM and supported by the Inter-American Institute for Cooperation in Agriculture (IICA), aims to ramp up food safety standards to enable CARIFORUM fish exporters to take up trading opportunities under the EU Economic Partnership Agreement (EPA). The project is financed under the EU’s 10th European Development Fund (EDF) Sanitary and Phytosanitary Measures Project.